Since purchasing a house two blocks from Hampton Park, CEA partner Mark Bastian was curious abut the history of the site... Once again keeping with Charleston the full story is much more interesting than meets the eye. 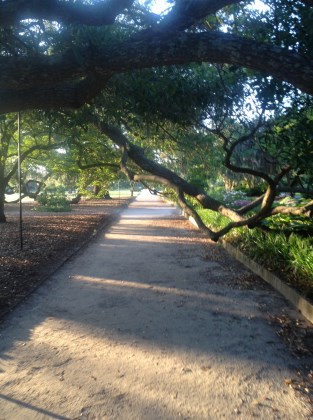 The land constituting current-day Hampton Park was, by 1769, part of a plantation owned by John Gibbes and known as The Grove or Orange Grove Plantation.

In 1835, part of Gibbes' plantation was acquired by the South Carolina Jockey Club, a group that developed the Washington Race Course on the site. An annual horse race in February attracted thousands of spectators who could watch the races from an Italianate grandstand designed by Charles F. Reichardt. Today, Mary Murray Drive is a one-mile (1.6 km) parkway that circles Hampton Park in almost the exact location of the race track.

The city of Charleston acquired a part of the exposition land for a park. The park was named in honor of Confederate General Wade Hampton III who, after the Civil War, had become governor of South Carolina. The bandstand from the trade exposition, once located in the center of the park, was saved and moved to its present location at the east edge of the park at the foot of Cleveland St.[8] In addition, the building at 30 Mary Murray Blvd., which is currently used as the city's Parks Department offices, was retained from the exposition, where it served as a tea house.

The city retained the services of Olmsted, Olmsted & Elliott, a landscaping firm from Boston. John Charles Olmsted, the adopted son of Frederick Law Olmsted, designed a plan for a park following his first visit to Charleston in 1906.[9] At least part of his plans for long parkways along the Ashley River were disrupted when the city sold the approximately 200 acres (0.81 km2) along the Ashley River, the Rhett Farm tract, to the Citadel for the relocation and expansion of its campus.

The city began a redevelopment of the park starting in the early 1980s. Following several years of decline in the park's condition, the city refocused landscaping efforts on the park, reduced crime, and installed a small snack stand designed by Sandy Logan.

The concession stand has been shuttered for many years but provides a shaded place to sit for park visitors.

The refurbished park reopened in June 1984 after a year of improvement work when the Piccolo Spoleto finale was held at Hampton Park.[17] Today, the park is popular with walkers, joggers, and cyclists who use the one-mile (1.6 km) perimeter road for exercise. In previous years, the park was the location for the finale of the Piccolo Spoleto Festival and in present day remains the site for the MOJA Festival in addition to many weddings and other special events.

Oops, you forgot something.

The words you entered did not match the given text. Please try again.

Reply Evessedly
2:07 AM on September 5, 2021
https://buystromectolon.com/ - ivermectin pills for sale

Reply zithromax online canada
6:40 AM on September 17, 2021
why does cialis give sore back

Reply does plaquenil cause weight gain
9:14 AM on September 21, 2021
Amoxil Otic